This week we are talking with Niki Phillips, also known as Lady Hawk, who was one of the ten contestants on Steampunk’d, from GSN, the Game Show Network. Steampunk’d is the first steampunk reality show to be broadcast on cable television.

Airship Ambassador: Hi Niki, thanks for joining us this week.

AA: It’s always an amazing experience to be on the ground floor of a brand new project. As a brief summary, how was it for you to be on the first steampunk reality show on TV?

NP: It was intense, sleep deprived and inspirational. 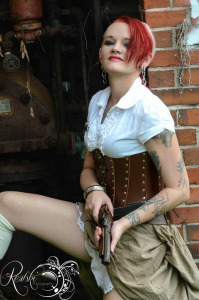 AA: How long have you been involved in the steampunk community and what brought you into it?

NP: I’ve been involved in the steampunk community for about six years (2009) now, but have known of it for a bit longer.

AA: How long have you…