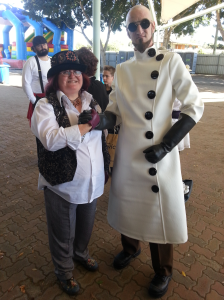 Mad Scientists of the world unite!

Jargon: the language, especially the vocabulary, peculiar to a particular trade, profession, or group.

A little research will provide you with a working vocabulary in  your chosen field. For example, if you are writing about botany, you need to know what the various bits of a plant are called, and have a little background knowledge in plant classification.  A botanist would know the difference between a deciduous tree and evergreen tree, or a stamen and a pistil, but they might be completely clueless about how electricity works. Jargon is very specific to its field. (And I loathe how every scientist on television is an expert in every different sort of science. That is lazy writing.)

You can make your own jargon up, in fact, I would encourage you to give it a go. However, it has to be consistent. If your characters use a newly-coined word in one situation, they should use that word all the time. A good example of this technique is used in the webcomic Girl Genius; everyone with a natural affinity and intuitive talent for making gadgets are called ‘sparks’. This term never jars, as it is used consistently to refer to these gifted individuals.

It is possible to write a Steampunk novel without using jargon, but as the genre is all about science, it is harder to write without using scientific jargon. When you are using jargon, don’t assume the reader knows what the jargon means. You can include a glossary for these terms, but I recommend explaining the meaning of the term when you first use it in the text. There are a couple techniques that can achieve this result. You can have a character explain the meaning of the unfamiliar term to another character, the unknowledgeable character maybe a new apprentice, maybe a visiting relative, whatever. You can put in a footnote with a definition of the term – I tend to favour this method, because a reader who does know the term can skip the footnote. Or you can just explain it!

It wouldn’t hurt to know who were the giants in your field at the time of narrative. For example, if you were a botanist in 1871, you’d know who Henry Lecog was, who Anna Atkins was (a topic for another post), and that Joseph Hooker was in charge of Kew Gardens. Anyone who is well known to a botanist is part of their jargon. If a person from 1871 was to lack the knowledge of Atkin’s cyanotype photograms of plants, that person would not be a botanist.

Jargon can be fun. It is almost like a secret language – which was its original intent, to help keep guide secrets. Using jargon will make you narrative both more interesting and more authentic.