Iron in the Soul: Steampunk Protagonists 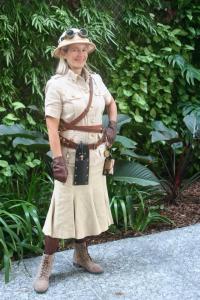 Go the good guys, even if they are girls.

A Protagonist is your heroine, the character who is going to save the world, often at expense of her or his own happiness. A protagonist need not be a human being, but this article is going to be about human protagonists, as analogues for the forces for good. Non-human protagonists and Anti-heroes will be covered in later posts.

in mainstream fiction, it can be harder to write a well-rounded protagonist than a villain. Villains can be fun to write, because they are often more quirky or eccentric than the protagonist. In Steampunk, this need not be the case. After all, the Victorian era was the Age of Eccentricity, and there is no reason why a mad – or sane – scientist can’t be the protagonist. In fact, I would encourage the use of the Scientist as Protagonist, as an analogy of the benefits of technology and innovation.

I would nominate Doc Savage as the epitome of the Scientist as the Protagonist, as he was both intelligent and heroic, even though he isn’t really a Steampunk character. His major flaw is the fact that he is too perfect, wa-a-a-a-ay too perfect, to the point he is a Marty-Stu. In fact, it could be argued that his ‘perfection’ should have worked against him, alienating the audience, except his redemption is in his team of friends. Every one of his team are scientists, but they are allowed to have the flaws that Doc doesn’t exhibit. And then there is the token female, Pat Savage, who is really just Doc Savage in woman form.

If I wrote a Steampunk version of Doc Savage, some of his team of scientists would be women, and Doc would have a few real flaws of his own, and not the kind of ‘actually virtues’ flaws. You know , those flaws that are like ‘I am too kind to kittens’, so aren’t really flaws at all. A too perfect protagonist doesn’t help the plot, because they don’t suffer from a lack of confidence, and the audience knows they will win out. Of course you want the protagonist to win (or do you?), but you won’t have much of a story if they win too easily.

In my own Steampunk Work-in-Progress, my protagonist is a scientist, a woman Biologist whose main interest is Botany. She has a female assistant and a female guardian (her parents are missing, presumed dead … but are they?), and the rest of her ‘team’ are her bisexual best friend – a young man based on Oscar Wilde; an Australian inventor who is her Romantic Interest and friend; and a young gentleman scientist who rivals the Romantic Interest for my protagonist’s affections. Her obvious flaws are her obsession with being right, her bitterness against the Patriarchal establishment that won’t recognise her research, and a confusion as to what her heart wants. She is a redhead, but she doesn’t have a temper!

She has iron in her soul. She has had to be strong after the loss of her parents, and she isn’t willing to subjugate her scientific genius because of her gender. Life is going to temper her iron into steel. She is my analogy about the benefits of science and innovation; ignorance and intolerance are her enemies.

A Steampunk protagonist need not be a scientist. They can be an airship pilot, a plucky girl, an explorer, but they still have to conform to the genre. They will have to interact with gadgets. I would prefer their interactions be positive, as a pro-science discourse is the aim of Science Fiction, unless you are writing a about an industrial dystopia. But don’t let my preference restrict you. You are the author of your protagonist and their fate.