Diving into a research maze

Miss Sarah Bernhardt, as the Ocean Empress, circa 1880. Image from the Library of Congress

This is a story about how a writer can waste an entire day excited by an image, to come up empty handed. I come across the above image, of a pretty woman seated beside a man dressed in a diving suit, about twice a month. This is probably because the photograph conforms to the ‘Steampunk’ genre and aesthetic – contrasting a Victorian beauty with the ‘high tech’ of the diving suit. Then I stumbled across the photograph below, of the same woman wearing a dive suit!

Well, I was excited. Maybe the young woman was an adventurer, like lady aviators, exploring under the horizon instead of above it. The only problem was the image of the young woman had been shared so many times, that I couldn’t follow it back to the original posting. Then I tried searching for ‘Victorian era woman diver’. Alas, I was both lucky and unlucky. It turns out this is the actress, Sarah Bernhardt, dressed as the Ocean Empress. So I discovered the original images in the Library of Congress, but no evidence of a lady diving adventurer. 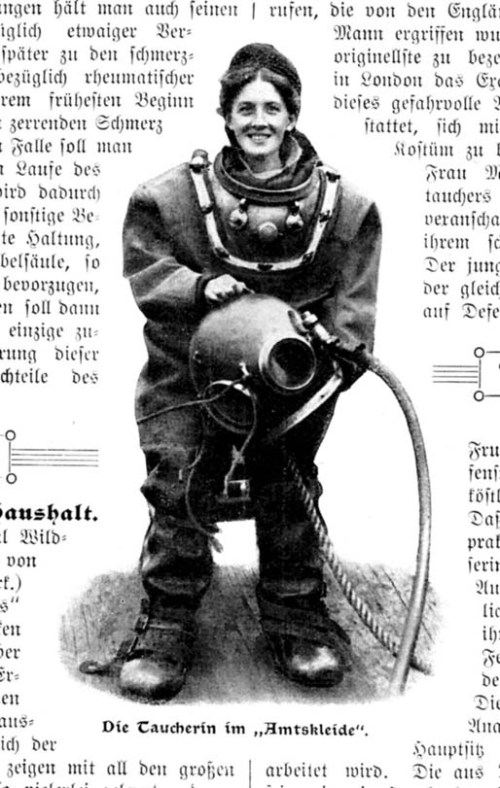 As far as I can tell, the earliest mention of female divers was around 1908, just missing the Victorian era. I do think the picture of Mrs Mitchell is more than awesome, however. Look at that confident smile! She had to be physically strong to even walk in that suit! If any of you know of earlier instances, please feel free to correct me.

In my Steampunk Work-in-Progress (yes, I know, you are all waiting for me to actually finish it), my protagonist actually does don a diving suit. The ‘modern’ diving suit was invented in the 1700s.  The British engineer, Augustus Siebe, developed the standard diving dress in the 1830s, the metal and glass helmet fitted to a full length watertight canvas diving suit, with tubes attached. The first commercially successful closed-circuit scuba tank was designed and built by the English diving engineer, Henry Fleuss, in 1878, while working for Siebe Gorman (founded and run by Augustus Gorman). His self-contained breathing apparatus consisted of a rubber mask connected to a breathing bag, with the oxygen supplied from a copper tank and carbon dioxide scrubbed by rope yarn soaked in caustic potash; the system’s functional duration was about three hours. This means that in 1871 – the era of my setting – it would not be too outrageous that she might have used a prototype of the scuba tank.

After all, it’s MY story. *grins* The fact it might not work as planned only adds to the suspense.