I was sorry to leave Larnach Castle and Dunedin; there was so much more we could have seen and done. Visiting New Zealand was beginning to feel like a European tour; the fjords of Scandinavia, the snowy peaks of Switzerland, Scottish moors, English farmlands, with the extra excitement of its unique wildlife. Our next stop was going to be another highpoint of the trip: Steampunk Headquarters in Oamaru. The drive was as scenic as anything we’d experienced previously, with rocky tors looming along the ridgelines.

I was still burdened with my cold, but the excitement of seeing Steampunk Headquarters burnt a lot of my discomfort away. Adrenaline is great stuff! When I caught sight of iconic train outside the Headquarters, I squealed with delight. My husband rolled his eyes, he isn’t a Steampunk Enthusiast. This outing was for my benefit only.

When I walked into the entry, I immediately started blabbing about being Steampunk Sunday, Queensland, Australia on Facebook. The lass had heard of me! She was going to wave the entry fee for both me and my hubby, but my hubby insisted on paying. Then it was a walk into Steampunk heaven.

I could easily share the dozens of photos I took, but my drooling over everything would get boring. Then again, this IS originally a Steampunk blog. We also spent some time in the gift shop.

We spent a couple of hours in the Headquarters, then we headed off to Christchurch, our last stop in New Zealand.

This was the day of our 27th wedding anniversary – and my husband’s birthday. So, we did out favourite thing and visited the museum across the road from where were staying: The Museum of New Zealand Te Papa Tongarewa. We ended up spending six hours there, including meal breaks. We didn’t take many photos; most exhibits requested no photography.

The museum is also an art gallery. We started in the portrait gallery, which has a computer set up to explain who the people were in all the portraits. It also gave random facts about the restoration of the paintings, some of the meanings and symbology within the paintings, and historical context. Brilliant stuff. There was also a gallery showing by Robyn White.

The more traditional exhibits were about indigenous animals, the Maori way of life, the tectonics of New Zealand, and a tribute to the ANZACs with large human sculptures done by Weta Workshop.

We also visited the Wellington Museum, about four blocks away on the same street. It is a much smaller museum, set into an old wool storehouse. My favourite piece there was the memento mori wreath made from the hair of scores of people – very Victorian era; my Steampunk persona was fascinated by its complexity. Most hair used in this manner was preserved in lockets, brooches, and rings. There was a clever use of the hair colours to pick out the details in the wreath.

There was an exhibit about the wreck of the ferry, Wahini, which made me cry due to so many little bodies lined up on the beach afterwards. Later on, I remembered we were taking a ferry to Picton and had anxiety over that. I kept checking the weather apps on my phone.

They also had an exhibit about the UFO panic of the late 1950s. Wellington has been paranormal for decades, it appears.

After being on our feet for hours and hours, we headed back to the hotel for a nap. There was sparkling white wine on ice and little cakes waiting for us … the staff knew it was our anniversary. That night, we had a romantic dinner at the hotel’s restaurant. I love my husband more every day, and was pleased he had a fun day for his birthday.

Falling Down the Rabbit Hole I’m currently following the competition between museums to find their creepiest object. I’m actually shopping a short story around about a medical model, so I find these bizarre objects right up my alley. This was all started on Twitter by the Yorkshire Museum, who kicked off with a 3rd/4th century hair bun from the burial of a Roman lady, still with the jet pins in place. 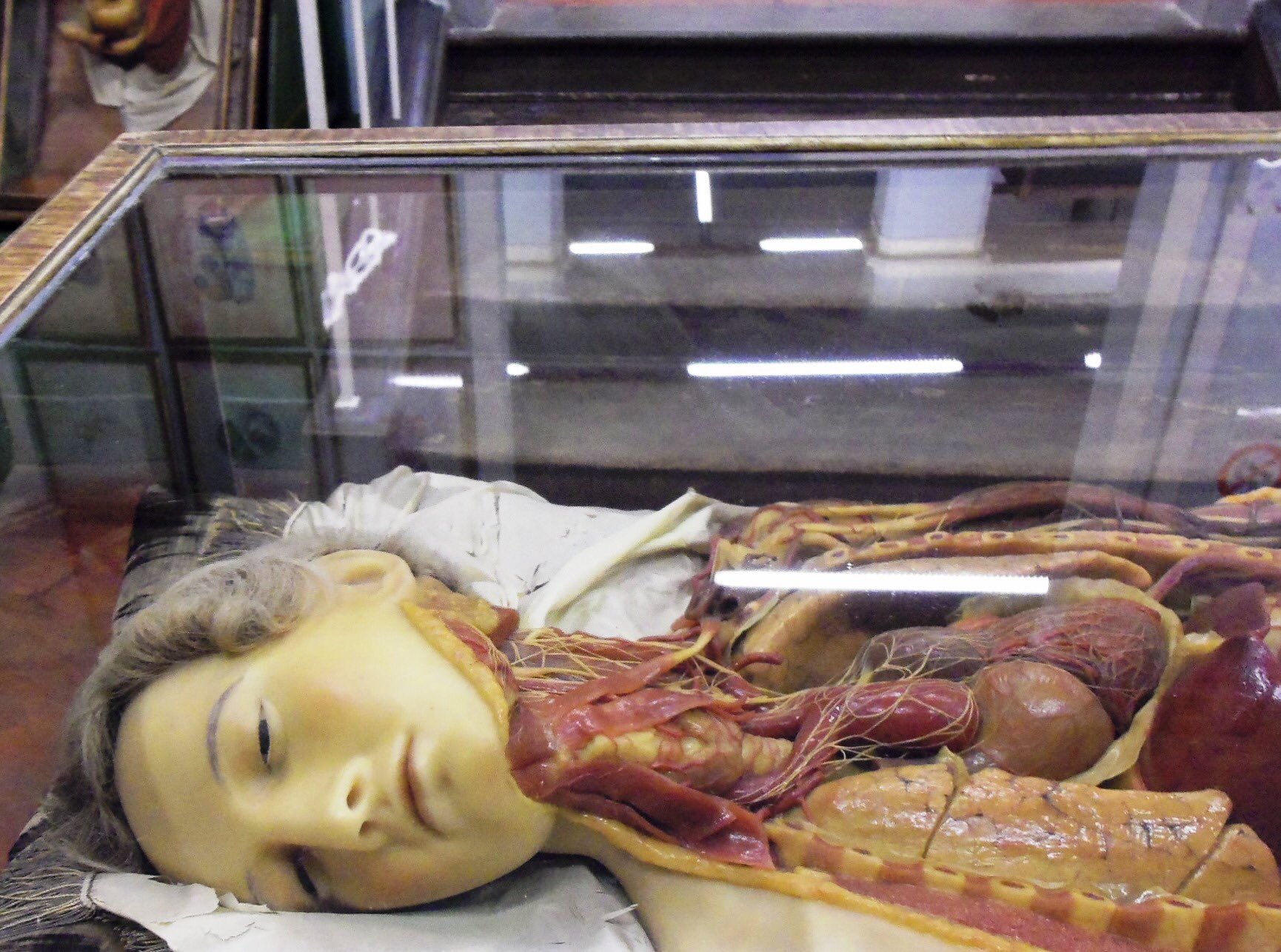 I don’t think anyone is going to top the leg transformed into a beast.

However, the ones that haunt me the most are the taxidermy objects: the Fiji mermaids, the crab claws playing cards, the kittens posed as if playing games, the fox with a woman’s death mask, the badly stuffed lion. Every single one of these could inspire a story from me. I am very tempted to write a short story collection based on all this rogue taxidermy.

A Night at the Museum: A Steampunk Perspective

The Victoria and Albert Museum,London, is the world’s largest museum of decorative arts and design, housing a permanent collection of over 4.5 million objects. It was founded in 1852 and named after Queen Victoria and Prince Albert.

Until quite recent times, museums were private collections that were open to the cleaner and nicer sort of public at the whim of the collection’s owner.  Having your own collection of art, antiquities or scientific curiosities was a status symbol for the rich and upper middle classes. For example, when the British Museum was opened to the public in 1759; the curators thought that large crowds could damage their priceless artifacts. So prospective visitors to the British Museum had to apply in writing for admission, and only small groups were allowed into the galleries each day. The British Museum became increasingly popular during the Victorian era as the amateur pursuit of Science became a ‘fashionable’ pastime for all age groups and social classes. Larger numbers of people visited the British Museum, especially on public holidays. The Smithsonian Institution Building – also known as the ‘Castle’.

In 1846, The Smithsonian Institute was established – to the unending delight of science nerds everywhere. (Personally, I hope to visit the Smithsonian one day, with a few weeks under my belt so that I can see all of it.) Surprisingly, it was due to the British scientist James Smithson that created the Institute. Smithson left most of his wealth to his nephew Henry James Hungerford; however, when Hungerford died childless in 1835, the estate passed “to the United States of America, to found at Washington, under the name of the Smithsonian Institution, an Establishment for the increase & diffusion of knowledge among men”, in accordance with Smithson’s will. The U.S. government was tempted to use the money for other purposes, but it eventually made the morally correct decision to found a museum such as had never been seen before. The Smithsonian now comprises of nineteen museums and galleries, as well as the National Zoological Park.

Also in America was Barnum’s American Museum, which was situated in New York and ran from 1841 until it burnt down in 1865. This a double tragedy, for not only were many exhibits destroyed, but as the animals struggled to escape the fire they were shot dead by policeman, who were only working in the interests of public safety.  Before it burnt down, it was closer to a cabinet of curiosities or a collection of sideshow attractions than a museum as we know it today. After it burnt down for a second time, Barnum converted most of the exhibits into attractions at his famous circus.

The main goal of our modern museums is to educate rather than just entertain.

As a writer, my mind resembles a cabinet of curiosities more than it does a true museum. I try to update the collection and fill in the holes, writing index cards and create logical categories, but my mind keeps turning back to the stranger bits tucked away in my muse’s files. However, I can’t make museums any stranger than what they already are, and this makes them the perfect Steampunk setting or metaphor. Best of all, you can tailor your fictional museum to fit your needs.

The Old Queensland Museum Building (the new building isn’t quite so interesting).