Steampunk and Doctor Who – in particular the Christmas Specials

Doctor Who had always had a love affair with the Victorian era, and Science Fiction plus the Victorian Era is pretty much what Steampunk is all about.  I am certain my on interest in all things Steampunk was partially inspired by my love of all things Whovian. 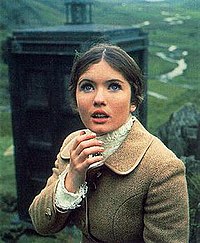 Victoria Waterfield was the daughter of scientist Edward Waterfield, who in 1866 was experimenting with time travel. She was a companion of the Second Incarnation of the Doctor, and friends with Jamie (my very favourite companion, as I love a man in a kilt). She ended up living in the 20th century.

The majority of the Christmas specials seem to gravitate to the Victorian era as a setting. This is because the British are nostalgic and love the idea of an old-fashioned, traditional Christmas (and there is nothing wrong with that, says the Australian woman who has never seen snow). And – of course – it was in the Victorian era that most of those traditions were started, like the Christmas tree and the exchanging of cards.

As well, Christmas makes a perfect setting for a scary story. Charles Dickens knew that, with his famous  Christmas ghost story The Christmas Carol. (And let’s not forget that Dickens appeared in the episode The Unquiet Dead, with ghosts and all and it wasn’t even a Christmas special!)

The Christmas specials are also rather famous for their guest stars and cameos as well, and that is one of the genre markers of the Steampunk literary genre.

But it just hasn’t been Christmas specials that have been set in the Victorian era. I’ve already mentioned The Unquiet Dead,  but there was also Tooth and Claw, which actually featured Queen Victoria. 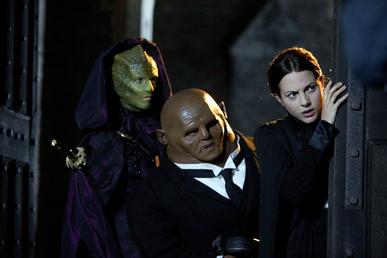 Any episode featuring the Paternoster Gang – Madame Vastra, Jenny Flint, and Strax – is set in the Victorian era except for A Good Man Goes to War;  their episodes have been The Crimson Horror, The Snowmen, The Name of the Doctor, and Deep Breath. I am hoping we will see them again.

And, last but not least, there is the Doctor’s own preference for wearing outfits based on Victorian gear – a style choice which Missy seems to be emulating. The First Doctor was most certainly dressed as a Victorian gentleman, as was the Eight Doctor. The Fourth Doctor was dressed in a Victorian era walking outfit. And this latest incarnation is most certainly influenced by First’s wardrobe. Even the TARDIS wears a Victorian-inspired paintjob; her disguise might be based on the Mackenzie Trench-style police box (from a 1920s design) but the very first police boxes were invented and used in the 19th century.

As both a fan of Doctor Who and a Steampunk Enthusiast, I can’t escape the aesthetics of the Victorian era.

Some Thoughts About the Sexuality of Time Lords

“I think I’m going to need a bigger flow chart.”

– the Doctor in The Husbands of River Song. The reboot of Doctor Who has never been shy about sexuality or gender issues. The Doctor loved Rose. Captain Jack was unashamedly pansexual – he is attracted to everyone, and this makes him very attractive in return. Shakespeare was portrayed as being bisexual. Clara had a romantic relationship with the Late Georgian/Regency author Jane Austen – Jane was a ‘phenomenal kisser’ and they played pranks on one another. The newly married Ponds were happy to don dress-ups as part of their sex play. The Husbands of River Song gave us an insight into the sexuality of both River and the Doctor – far more so than the Master/Missy interactions of the past two seasons.

You can’t tell me that that isn’t a lascivious look.

At one point, River lists Doctor’s other wives (that we know of). River mentions Elizabeth I, Marilyn Monroe, whose marriage proposal he accidentally accepted whilst at a party in A Christmas Carol, another Christmas special, and Cleopatra, who River posed as in The Pandorica Opens. They both have been married to Stephen Fry (lucky Stevie!). And River makes mention of her wives. Time Lords (and River has Time Lord DNA) must have a fluid gender identity and sexuality. I know a few people who have a problem with this concept. In the old series, the Doctor was asexual, except for the First Doctor who MUST have experienced some form of sexual reproduction to have a granddaughter. But the beauty of a long running series is that you can allow your characters to change and grow. We knew the Doctor was changed when he developed his deep emotional bond with Rose. Surviving  a war and the genocide of your species might have that effect.

Time Lords might resemble human beings, but there is no reason why they have to share the same human obsession with sexuality and genders. To me, what is much more important is that they love each other in the same way as we human beings love each other. Love defies barriers and defines us. River might be looking forward to seeing the Doctor’s new incarnation all over, but it isn’t the sex that defines their relationship. It is the love.

Filed under Doctor Who, Gender and Sexuality, Review, Uncategorized

Tagged as Doctor Who, Gender and Sexuality, Review

A Quick and Easy Cosplay Accessory

This is a toy based around the fart gun from Despicable Me.  I repainted this one to make it a Steampunk raygun. However…

I now want to find another so I can have a go at this paint job I saw on Pinterest.

The supporters of the Enlightenment believed that education was the cure to all of mankind’s ills. However, there were some strong opposition to educating women and poor people … in case they got ideas above their stations or their brains melted. This is no joke. In England, just as there was a strong move by Education Reformers towards having a basic education made available to all children, other people were lobbying to leave things as…

The Husbands of River Song: an episode review

The Christmas episodes for Doctor Who tend to be ‘fluffier’ – I think it is because of all that snow. This year’s episode was both humorous and touching, and was a contrast to the rather serious nature of the rest of the season. I would like to see more of this humour popping up in the future.

Now, let’s get one thing straight from the start, I am a huge fan of River Song and her ambiguous nature. So much of a fan, I own her sonic screwdriver and was thrilled to get a River Song figurine for Christmas.

So, I found the Christmas episode a true delight. Snappy dialogue. Witty repartee. Gorgeous guest stars. Fabulous outfits for River. And the chemistry between the Doctor and River … swoon!

River: If either of you use my name again, I will remove your organs in alphabetical order. Any Questions?

The Doctor: Which alphabet?

River: When you love the Doctor, it’s like loving the stars themselves. You don’t expect a sunset to admire you back. And if I happen to find myself in danger, let me tell you, the Doctor is not stupid enough or sentimental enough and he is certainly not in love enough to find himself standing in it with me.

And the penny finally drops for River.

River: I’m an archaeologist from from the future. I dug you up!

And… then there was the Doctor’s excited dialogue at pretending to find the TARDIS was bigger on the inside. I could watch that over and over again.

And… finding out that River’s last night with the Doctor was going to be 24 years long (talk about sexual chemistry).

This was the penultimate resolution of the lesson the Doctor learnt from losing Clara; to cherish your loved ones while you can, because you may never know when you will lose them. He knows that River’s adventures are coming to an end (her diary was given to her by someone who KNOWS how long a diary should be.) I had a little weep when I saw River’s realization that the Doctor really did love her.

River: I hate you.

Remember my blog about the coded messages between friends and family? I’ll let you work out this code for yourselves.

Overall, a very satisfactory episode. It became one of my favourites straight off.

Filed under Doctor Who, Review, Uncategorized

Tagged as Doctor Who, Review

I will be offline for a couple of days. Stay safe, but you don’t have to be good.