William Banting was basically the person who invented diets. He spent his working life as an undertaker. (I am unsuccessfully suppressing the urge to make the joke that “he really did put the ‘die’ in diet”.) After he retired from undertaking, he weighted over 90kg (200 pounds) and he was only 165cm (5 feet 5 inches). He considered himself corpulent, even though he claimed he was an active man; he believed his problem was that the more he exercised, the greater his appetite grew. The physician Dr. William Harvey advised him to take up a diet that restricted starchy or sugary foods. This worked well for Banting, and he reduced his weight to a more manageable level.

Banting ate four meals a day and drank a generous amount of wine in comparison to his overall caloric intake. He limited his intake of low fat meats and restricted the types of fish and meat he could eat. He ate a lot of vegetables – particularly greens – and fruit. The emphasis of his diet was on avoiding sugar, sugary foods, starchy food, beer, milk and butter. This change in diet worked, and Banting reduced his weight.

He wasn’t a man to keep his weight-loss secrets to himself. In 1869, he wrote a pamphlet, Letter on Corpulence, Addressed to the Public, which he published at his personal expense, to distribute to friends and acquaintances. People shared the pamphlet around and word-of-mouth worked overtime. His self-published edition was so popular that he started to sell it to the general public. The third and later editions were published by Harrison of London. Such was the pamphlet’s popularity that the question “Do you bant?” entered the language.

With the Atkins Diet, The Palaeolithic Diet, and the low-carb, high-fat diet (LCHF) are all based around the original Banting diet. Low-carbohydrate diets are dietary programs that restrict carbohydrate consumption, often for the treatment of obesity or diabetes. Please Note: It is important to always consult with your doctor or dietitian before embarking on a diet that restricts food groups.

Violin Vibrophone ; a quack cure used for Tinnitus. It was supposedly able to be tuned to match the ringing in a subject’s ears. The Victorian equivalent of sound-cancelling earphones.

I was in my late twenties before I realised that the practice of Modern Medicine was both a science and an art, with a dash of the supernatural thrown in to spice up the mix. I had my suspicions when an elderly male doctor tried to prescribe sedatives for my sinus headaches; I went to another doctor who told me to take mild antihistamines and cured the headaches. My suspicions were confirmed when both my sister and a good friends were told their medical conditions were nervous complaints, and both sought second opinions; one suffers from terrible endometriosis and the other had an ovarian cancer the size of a grapefruit. This was latter half of the 20th century, so imagine what it must have been like in the 19th century.

An attempt at recreating the effects of a leech as a medical instrument.

Medicine was still finding its way from the infamous barber surgeons and private physicians (who were mainly academics). Bad blood and bad air was still considered the cause of many an ailment. At the start of the Victorian era, cupping, leeches and balancing the humours were still part of the medical playbook. The rise of science meant their was a corresponding increase in scientific medical research, which eventually led to better diagnostics and much more effective medicines and therapies. However, the increase in new technologies also increased the number of weird and wonderful attempts as medicine was still feeling its way. It also led to a proliferation of quacks and their remedies designed to part both the desperately ill and the hypochondriacs from their money. 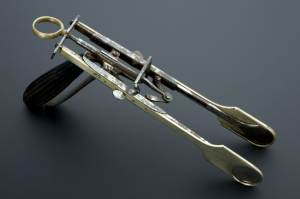 Hysterotome- for amputating the cervix

Some of the innovations made during in Victorian medicine can give you nightmares. The three instruments above are just some of the horrors that were invented. Some of the instruments were so scary that just looking at them makes me shiver, so I can’t imagine how the patients must have felt when approached by a surgeon carrying one. No wonder this is the era when the science of anaesthesia was discovered. 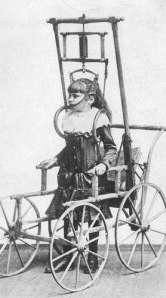 Many of the new therapy machines looked like Medieval torture devices, even though they invented with the very best intentions. There is a lot of opportunity for a writer to use such gadgets to add suspense and conflict into the life of the protagonist. Imagine having to suffer under a well-intentioned doctor who was subjecting your hero to these implements. How much worse would it be if the doctor wasn’t well intentioned?

If you are writing about medical matters in a Steampunk narrative, a little research will turn up a whole spectrum of wild and wonderful gadgets. You can find an implement to symbolize just about any disorder. As an example, a woman with ‘no voice’ might be having tonsil trouble, but might be afraid to speak because she has seen a tonsil guillotine. She has to overcome her fear to find her voice and her power. To relate this back to the modern era … a person should always be prepared to get a second opinion.