Glowing: A Steampunk Feminist Viewpoint on Radium in the Victorian & Edwardian Eras 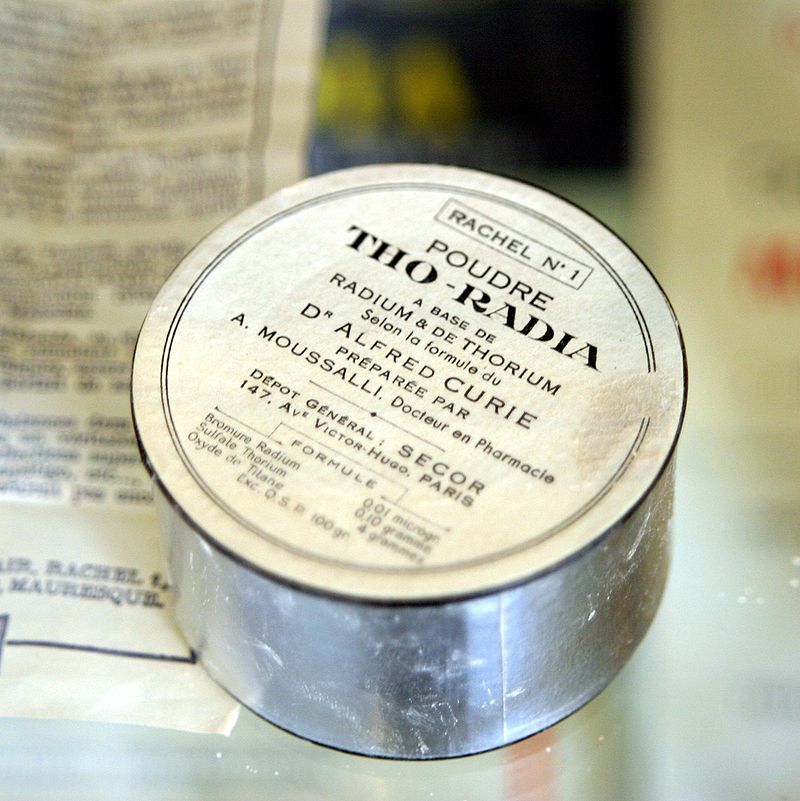 “Tho-radia” powder, based on radium and thorium, according to the formula of Dr. Alfred Curie (not related to Pierre and Marie Curie) Image from Wikipedia

This article reads better if you have this music playing in the background.

Radium was discovered by Marie Sklodowska-Curie and her husband Pierre Curie on 21 December 1898. Apart from making Madame Curie one of the most famous female scientists in our culture, Radium was for a while a ‘wonder of the age’. The name Radium derives from ‘ray’, the French word, due to the element emitting energy in the form of rays. To the Victorian mind, anything invisible – like magnetism or electricity – immediately meant that it must be good for you. At least, that is what the Quacks with their miracle cures and Snake Oil merchants wanted the public to think.

Now, to us in the 21st century, the idea of using radiative substances as medicine seems like madness. Even the legitimate uses of radiation, such as X-rays and radiation therapy for cancer, are treated with respect by patients and the medical establishment; those lead barriers aren’t there for show. In the late Victorian era and Edwardian era, radium was being used to make things glow, like watch faces and the hands on clocks … so the Quacks’ inference was that it might make you glow with health. Seriously.

Radium was once added to a broad range of products such as toothpaste, hair creams, food items, bottled water, ‘health’ spas, and quack medical therapies, due to its supposed curative powers. (Remember: Invisible = Good) Radium is highly radioactive and one of its breakdown by-products is radon gas; radon gas is also radioactive. Exposure to radium and radon, internal or external, can cause cancer and other disorders, because radium and radon emit alpha and gamma rays upon their decay, which kill and mutate cells. So eating, drinking and bathing in the stuff wasn’t beneficial to anyone’s health. Then again, we are talking about a society that was using lead and arsenic in lethal quantities.

From Wikipedia: Uranium sand houses, where patients would sit on benches in a round room that had a floor composed of mildly radioactive sand (usually beach sand with crushed minerals like Carnotite). These were popular in Utah, New Mexico, and Colorado during the 1950s. Lying in a narrow box with sands that reputedly contained uranium ore was promoted as a treatment for arthritis, bursitis, and rheumatism as late as 1956.

As a writer, I can see how easily radiation can be used as a metaphor or an analogy in a narrative. It is invisible and yet toxic! Some people didn’t understand it, and misused it, before even the scientists had a chance to understand it. Pierre Curie and Marie Sklodowska-Curie were so intrigued by radiation that they sacrificed their health and ultimately their lives to the study of radium and other types of radioactivity. Marie is considered a role model for women scientists everywhere … but she died as a consequence of her contact with radioactive elements before it was understood how dangerous they were. However, I believe she would not have shied away from her research even if she knew of her ultimate fate.

Because of their levels of radioactive contamination, Marie’s papers from the 1890s are considered too dangerous to handle. Even her cookbook is highly radioactive. Her papers are kept in lead-lined boxes, and those who wish to consult them must wear protective clothing.

6 responses to “Glowing: A Steampunk Feminist Viewpoint on Radium in the Victorian & Edwardian Eras”