The Attraction of Ruins as a Steampunk Setting

“What’s the use of a fine house if you haven’t got a tolerable planet to put it on?” 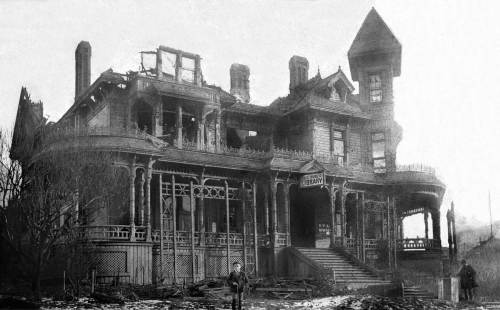 If you are looking for a dangerous or creepy setting, there is nothing quite as suitable as a ruin. You can use it as a straightforward setting for some action or a plot twist. It gives a writer the opportunity to use their descriptive skills to create an atmosphere. Go for the Gothic!

However, a ruin can be dangerous because it may be unstable or a rotted hulk, and that makes it a perfect metaphor for a relationship that may be crumbling from internal stresses. It might reflect the rot inside a person, as they erode their ethical and moral boundaries. It might even symbolize a crumbling ideal; the house was built for a pair of newlyweds full of hope for the future, and now it is falling apart like their hopes and dreams.

The best example I can think of is Dickens’ Miss Havisham and her ruined mansion, from Great Expectations. Her house is the metaphor for the pitiful ruins of her life, neglected and almost abandoned, rather than cared for. The clocks throughout the house were stopped at the time Miss Havisham received the letter from fiance, both jilting her and defrauding her of some of her wealth. The dining room is full of the dusty remains of the wedding banquet and cake, as dry and dusty as broken heart.

Then there is the enchanting concept of follies. Follies were often built to resemble picturesque ruins. Very fashionable at one time, 18th and 19th century garden follies often were built to resemble ruined abbeys or castles,  to represent different historical or classical eras. It isn’t much a jump to use a folly as a metaphor for a desperate or silly act or event, by using a folly as the setting.

The Irish Potato Famine of 1845-49 led to the building of several follies. The society of the day held that reward without labour was misguided. However, to hire the needy for work on useful projects would deprive existing workers of their jobs. Thus, construction projects termed “famine follies” came to be built. These include: roads in the middle of nowhere, between two seemingly random points; screen and estate walls; piers in the middle of bogs; etc

So, as you can see, a little research and you are bound to find ruins or a folly to use as a setting. And if not, you can can have the fun of designing your own.

2 responses to “The Attraction of Ruins as a Steampunk Setting”