I was pretty excited when I found the Genderbread Person meme. It clears up the confusion about what defines gender, sexuality, and biological sex. What I really like about it is the use of the word ‘person’. This doesn’t mean I’ll stop calling those doll-shaped gingerbread biscuits ‘gingerbread men’; but it allows for the possibility of ‘gingerbread women’, and everything else in between. It is only in the last decade that the majority of the Western World has come to understand that gender isn’t cut and dried, that gender is a performance, and gender is fluid, not a binary.

So let’s breakdown the concept of gender binaries for the Victorian era. Basically, whatever a man was, a woman wasn’t. Men were strong; women were weak. Men were tool-users; women weren’t (so who do you think invented grinding stones, baskets and slings?). Men were innately honest; women were deceitful by nature. The perfect example of this viewpoint summarized in the song from the musical My Fair Lady – based on Pygmalion by George Bernard Shaw (writing about gender and class). Extract:

Women are irrational, that’s all there is to that!

Their heads are full of cotton, hay, and rags!
They’re nothing but exasperating, irritating,
vacillating, calculating, agitating,
Maddening and infuriating hags!
[To Pickering]
Pickering, why can’t a woman be more like a man?

Pickering: I beg your pardon?

Why does ev’ryone do what the others do?
Can’t a woman learn to use her head?
Why do they do ev’rything their mothers do?
Why don’t they grow up- well, like their father instead?
Why can’t a woman take after a man?
Men are so pleasant, so easy to please;
Wherever you’re with them, you’re always at ease.

Would you be slighted if I didn’t speak for hours?

Pickering:
Of course not!

Henry:
Would you be livid if I had a drink or two?

Henry:
Would you be wounded if I never sent you flowers?

Henry:
Well, why can’t a woman be like you?

One man in a million may shout a bit.
Now and then there’s one with slight defects;
One, perhaps, whose truthfulness you doubt a bit.
But by and large we are a marvelous sex!
Why can’t a woman take after man?
Cause men are so friendly, good-natured and kind.
A better companion you never will find.
If I were hours late for dinner, would you bellow?

Pickering:
Of course not!

Henry:
If I forgot your silly birthday, would you fuss?

Henry:
Would you complain if I took out another fellow?

Henry:
Well, why can’t a woman be like us?

If this song wasn’t meant to be satirical, I would be completely enraged by these lyrics. But they do an excellent job of detailing how masculinity was portrayed by the average Victorian male, and how they perceived the portrayal of femininity. The problem is these portrayals are:

From our viewpoint – looking back at the Victorian era – we tend to only see those gender portrayals that fit neatly into the two boxes, masculinity and femininity. This view is most certainly incorrect. Thank goodness, we no longer see History as cut and dried, and most Postmodern historians realize that history is fluid and changing.

We know that women in the Victorian era were restricted socially, educationally and legally in comparison to men. But it is time to accept that not every woman  – or man  – followed those restrictions. 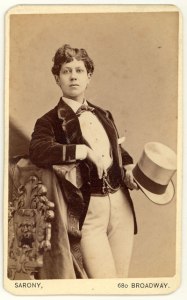 I mentioned the cross-dressing George Sand in a previous blog article. She was probably the best example of people rebelling against the severe restrictions of Victorian society, but she wasn’t the only one. Suffragettes were rebelling, female students were rebelling – with the support of their friends, colleagues and brothers, and the stage was set for Modernism and Postmodernism, and the Sexual Revolution of the 20th Century.

7 responses to “Postmodern Gender Fluidity versus the Victorian-era Binary Model of Gender: A Steampunk Feminist Perseptive”