Sharing Steampunk: some thoughts about popularity 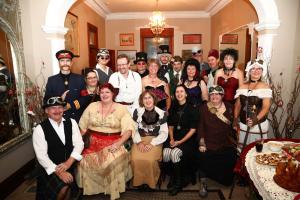 Steampunk is a subgenre of Science Fiction. In the past three decades, Steampunk has managed to generate several subgenres of its own, like Gaslamp Fantasy and Dieselpunk. These are growing large enough to count as genres in their own right, with their own aesthetics and genre markers, and with their own authors, illustrators, artists, and cosplayers. Some people think Steampunk is getting too popular, and this popularity is ruining the playing field for the ‘real’ enthusiasts, because the genre can be interpreted in too many ways.

Let me be the first to disagree with that attitude.

Some people see Steampunk devolving into an uchronic mythology based on the Industrial age in Victorian England. These are purists who want to see all the historical details remain accurate, forgetting that Steampunk shares many of characteristics of the Alternative History genre. The important word in the previous sentence is ‘alternative’, which means creative changes can be made to the details. Lots of changes, such as changes to the time period, social mores, technology levels, the existence of magic and magical beasts, and anything else that takes your fancy.

It is these fluctuations in the details that creates the subgenres.

While a Literary genre is growing and changing, it can’t get stale. It is this acceptance – nay, embracing! – of change that keeps Steampunk vibrant and interesting. This is the same reason why the English language is alive and well in the modern world, because it isn’t afraid to try out new words and new concepts. Steampunk loves to experimentation and innovation; in fact, it is one of the biggest genre markers of the category. New subgenres are just a sign of a healthy literary genre.

I don’t understand how Steampunk can be ‘too’ popular. Popularity means more Steampunk genre books & art, and Steampunk-themed movies and television shows, and much else. It means that people understand what Steampunk is without a lengthy explanation. It means more creative people joining the Steampunk community, making it richer and more complex.

Steampunk isn’t a secret to be clutched to your chest and hidden away, like some old curmudgeon in a dusty apartment. Open that door and let other people join the party. The more, the merrier!

11 responses to “Sharing Steampunk: some thoughts about popularity”